“A life in the balance” 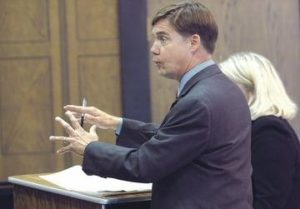 Bob Wolfrum of St. Louis, a public defender in the Capital Division, attended a motion hearing for his client at the Cape Girardeau County Courthouse in Jackson.

For public defenders in capital cases, victory can come even in defeat.

The case was lost and the accused convicted, but the tears defense attorney Jan Zembles cried were of relief, not sadness.

For more than three hours, jurors deliberated the punishment for 26-year-old Justin Brown, convicted of the 2002 kidnapping and murder of Ralph Lape in New Madrid County. His only sentencing possibilities were life imprisonment or death.

During the deliberations, Zembles, Brown’s public defender, sat quietly in a spectator seat of the Pulaski County courtroom, exhausted from the six-day trial.

“That is perhaps for me the most peaceful time of the whole trial,” she said of deliberations. With her work done and the case out of her hands, all Zembles could do was wait and not dwell on what the jurors were doing.

But all that quickly changed when word came back: A decision was made. Peacefulness turns to tension when a verdict has been reached but has not yet been returned.

Sitting at the defense table, Zembles closed her eyes. The first word of the verdict was read. Zembles reached over, grabbed Brown’s hand and began to cry.

His life was spared.

For lawyers in the Capital Murder Division of the Missouri State Public Defender System, victory can come even in defeat.

“Generally speaking, if nobody else dies, that’s a win,” said Zembles, 60, who is also the director of the Capital Murder Division district in Columbia, Mo.

Seventeen other lawyers in the division also represent defendants who cannot afford a private lawyer and are facing the death penalty. They are spread out over the three districts in Missouri, which include Kansas City and St. Louis.

Since 1989, when capital punishment was reinstituted in Missouri, the division has handled 451 death penalty-eligible cases for indigent defendants, according to director Karen Kraft.

Those cases have led to 149 jury trials, 23 bench trials and 242 guilty pleas. Other cases included 29 dismissals, seven resentencings wherethe death penalty was waived, and one case where the defendant was found incompetent to be executed.

Two public defenders from the Capital Murder Division are appointed to each case. At least one of those lawyers has multiple years of experience, according to Cathy Kelly, director of training and communications for the state public defender system.

Unlike their 360 counterparts in the noncapital Trial Division, who each handle an average of 298 cases per year, public defenders in the Capital Division have no more than six cases at a time. The starting salary of a the trial public defenders is between $33,750 and $52,000 a year. Attorneys dealing with capital cases receive a salary boost of $6,000 or $12,000, depending on their experience.

While the trial division attorneys deal with having too many clients, lawyers in the Capital Division face a different stress.

“Our pressure is more the possibility of the outcome,” Zembles said. “Quite literally, someone’s life is on the line.”

In the Capital Division, many opt to take some time off when they lose a case.

Kraft said the public defenders are encouraged to take a few days off and to be careful to have a life outside of work.

“Otherwise, it will totally consume them,” she said of the job.

When Zembles loses a trial, and especially when the sentence is death, she said takes a week to two weeks off from work.

Despite the pressure of a life hanging in the balance, the Capital Division has a better retention rate than the Trial Division, which has a cumulative turnover rate of 100 percent in just five years. Some experts attribute the high turnover rate in the trial division to the heavy workload and low pay. By contrast, the majority of the Capital Division staff have been around for at least 10 years, according to Kraft.

“They’re here because this is something they believe in quite a bit,” she said, adding that many of the attorneys oppose the death penalty. Their work allows them to fight against it on the legal level.

Zembles attributes her fight against the death penalty in the legal arena to “In Cold Blood,” Truman Capote’s novel and its movie adaptation that told the story of the 1959 slayings of a Kansas family and their killers.

“That novel and that movie, for whatever reason, made me decide to be in total opposition to the death penalty,” she said. “Every time I get a death verdict, it is an assault.”

A schoolteacher for 18 years, Zembles decided to become a lawyer after seeing attorneys for the school district in action during a collective bargaining session. Brought up to help those less fortunate than herself, Zembles said she was drawn to the public defender’s office, and then the Capital Division based on her beliefs.

“I don’t believe the government has a right to kill anyone,” she said.

But the battles against death do not always end like Brown’s case. Occasionally when the lawyers who have fought the fight lose, they see their client through to the very end.

Janet Thompson is an appellate lawyer with the Capital Division, also out of the Columbia office. After a conviction in which the death sentence is handed down, Thompson is responsible for trying to get the decision overturned.

While working on appeals for her clients, she becomes close to them, she said. Twice, after all appeals failed, a client has asked her to be a witness at his execution.

She honored both men’s requests.

“Seeing that very clinical process take place … it really shakes you to your core,” she said. “It made me so much more aware in a deeper way of what the whole fight was about.”

Zembles has never been asked to be a witness to an execution. So far none of her clients has been executed. But some have been sentenced to death, and a couple are nearing the end of their appeals.

If asked by a client, Zembles said, she would attend an execution.

“How could you ever say no to that?” she said. “As difficult as it is for you, it’s more difficult for them.”